Join us as the Spartanburg County Public Libraries celebrates Black History Month throughout February. African-American history in Spartanburg County parallels the tragedy, hope, and progress that has strengthened our nation through its most difficult trials. Stolen centuries ago from their families and consigned to lives of unwilling service in a rigid social order, freed from bondage only to be shackled by intolerance and bigotry, shown the path to opportunity but too often blocked by generational poverty, the many injustices borne by African-Americans have, against all odds, failed to extinguish a vital light that shines forth and enriches all people of our country.

From the 13-year-old servant who saved the life of Colonel William Washington at the Battle of Cowpens to the minister’s wife who sacrificed her red petticoat to sew the stars and stripes for the American soldiers that had ensured her emancipation, African-Americans have spoken and acted alongside their white peers during the entirety of Spartanburg County’s history. For most of that time, their words and deeds have been obstructed and obscured by biased sources and incomplete records, but during the month of February, the Spartanburg County Public Libraries take special note of what has survived the passage of time and honor the legacy that has reached us. Here you’ll find a listing of events and resources during the month of February that celebrate this powerful heritage.

This two mile walk through downtown Spartanburg and the Southside neighborhood begins at the Headquarters library and passes by twelve historic sites that help tell the story of Spartanburg’s African-American community. 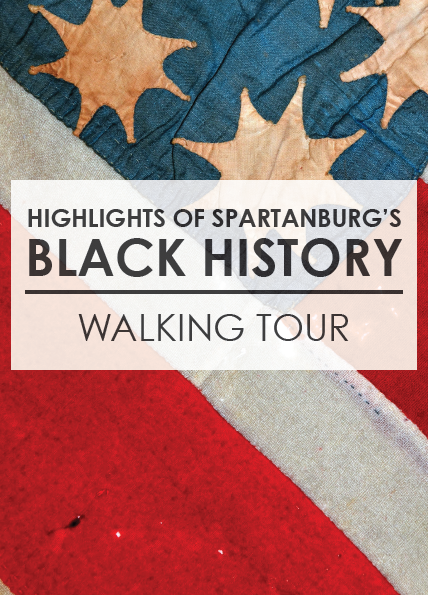 Materials for all ages


Historic Freedom Flag
Brad Steinecke of the Kennedy Room explains the significance of a hand-sewn American flag in the library’s collection that was once held at the head of a parade through downtown Spartanburg in September of 1865.